More pages in this section

Townsville was still only an infant settlement when St Joseph's Church was built on The Strand. On the 27 February 1873, Sisters Gertrude Wright and Magdalen Foley arrive in Townsville to establish the first Catholic school in the town. 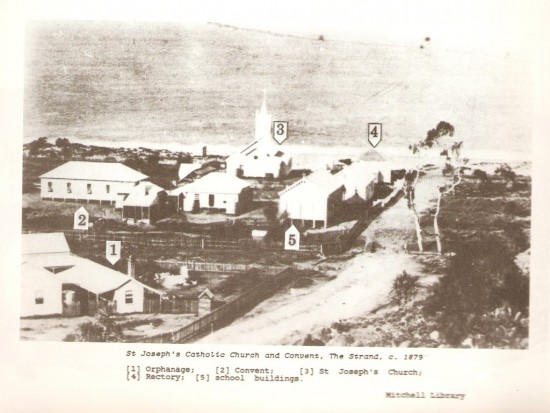 Mother Mary of the Cross visits St Joseph’s on the Strand for the first time and teaches classes during her visit.

Tenders are called for the construction of two dedicated school buildings at the St Joseph’s site. These buildings, an infant and primary school, were probably completed later that year.

Mother Mary of the Cross visits Townsville for the second time. Due to ongoing hardships and disagreements with the parish priest she decides to withdraw the Sisters of St Joseph from Townsville, closing the school. Six sisters leave Townsville for Brisbane with 15 orphans who remain in their care at the end of March.

Mother Mary Benigna Desmond arrives early in the year, having been placed in charge of re-establishing St Joseph’s Primary School. She has a reputation for passion and industriousness, and the school re-opens shortly after her arrival. 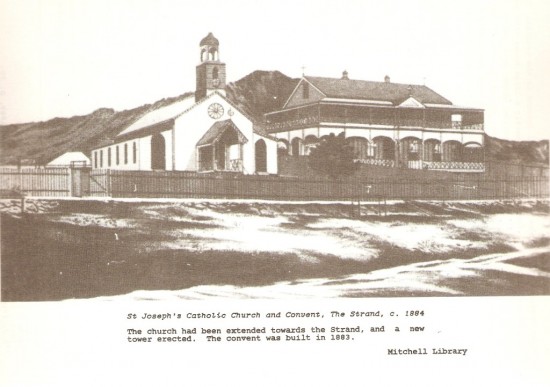 St Joseph’s Catholic Church and Convent, The Strand 1884. The church had been extended towards the strand and a new tower erected.  The convent was built in 1883.

Severe flooding devastates the church and school grounds. The foundations of the church are washed away in the deluge, and the church collapses into the newly exposed watercourse. Irreparable damage means the original church must be demolished. Until the completion of what is now the Sacred Heart Cathedral on 16 November 1902, Mass is held in St Joseph’s Primary School.

The Upper Primary School building at St Joseph’s is moved to Railway Estate to be used as a Church and School there. The removal of the primary school building makes way for the construction of the third St Joseph’s Church. Bishop Joseph Shiel lays its foundation stone in 1919, and the church is blessed and opened in 1921.

On her return from New Zealand, Sister Mary Aidan Stephens introduced the Montessori system of education into St. Joseph’s School and St. Patrick’s College on the Strand.

Due to disruptions caused by World War II, St Joseph’s School on the Strand was closed. The school re-opened in 1942.

Mr. Paul Lucas, a former student of Our Lady’s Mount Christian Brothers College, is appointed principal of St Joseph’s Primary School. He is the first lay principal to be appointed in an Australian Catholic school.